Coming this Summer to a Gallery Show near you, are scenes so
gruesome, so terrifying, it will knock you onto the Edge. Of. Your. Seat! Once
upon a time, five hand-made rag dolls were made by the hands of an aspiring
artist with dreams of hope and wonder. Now the artist has gone away, leaving
these five maniacs to play. Dolls with attitude. Dolls on a mission for
vengeance. Dolls with a hunger for blood and sadism. These are toys that don't
like to be messed with. Murder, Violence, and the Heat of Passion in ‘Patchwork
Horrorshow’. Rated X.
(Complete) 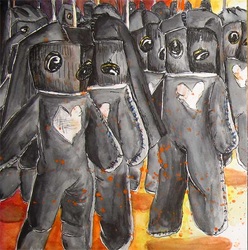 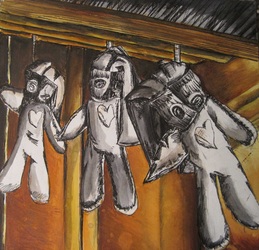 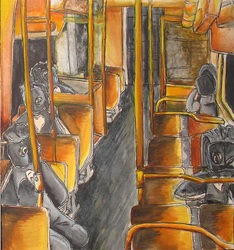 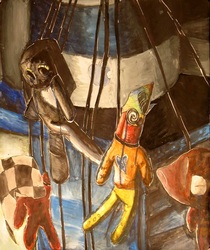 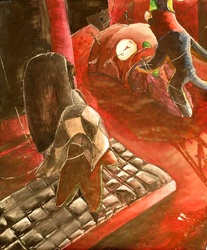 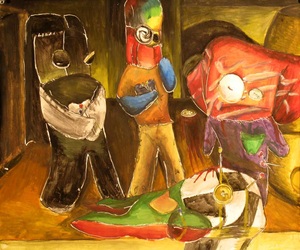 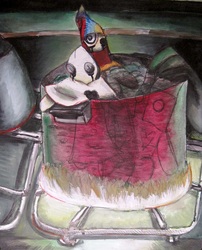 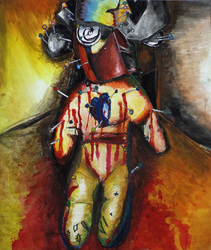 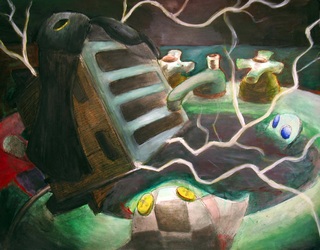 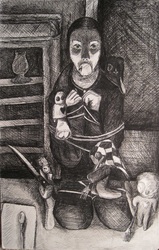 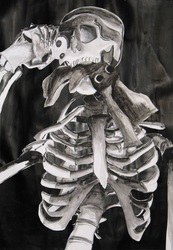 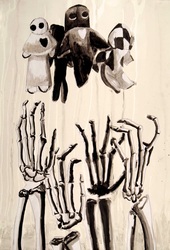 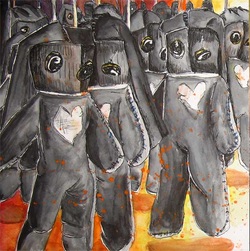 "A three part set sure to excite you, Dolls Dames & Electric Trains is the ace of spades in my book." Okay I promise I'm not going to do the whole description that way. Dolls Dames & Electric Trains is what I would refer to as my 'genesis' piece. You know, that one little accomplishment one makes that gave the artist in question their style and supplies they feel comfortable with. Every artist has one.
This had to be the first piece(s) I ever made using india ink straight from the bottle and I never thought anything of my watercolors until I made these. The assignment was that we were meant to bring an object we hold of high importance and make three little 10X10 artworks based around them, so I brought one of the handmade rag dolls I made in my free time (I call her "Ebony" :D) and used her as my model 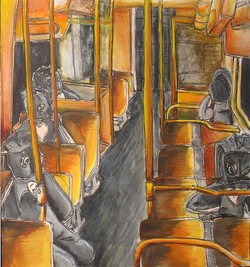 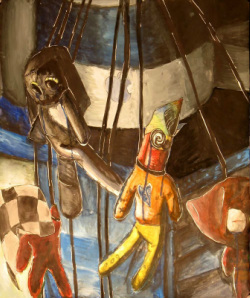 The first of my primary color miniseries. I started the concentration with only one clue as to what I had to do; use the dolls. People held a high positive reaction with Dolls, Dames & Electric Trains, so I was just let loose and I did whatever. It has been clear to me that I prefer color schemes over photo-realism, and while on the topic of suicide, a sad shade of blue felt the most appropriate to compliment the symbol of tears.
​
Media: Ink and Watercolors 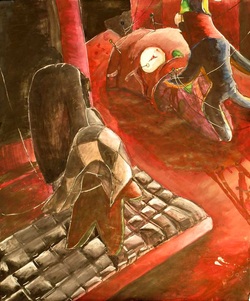 This may come as a big suprise to everyone, but I watch slasher movies. Now just take that in. Breath... and okay.
Homocide - Red is the second in my primary color miniseries, employing the act of murder in its lowest common denominator. When I made these dolls, I always envisioned Temper (the doll with the red head) as the bitter one that was always the victim of everything and Psychopomp (the one with the bandana) as the real psychopath. I employed it here, added a few witnesses and poured red watercolors everywhere, expressing the symbol of blood.
​
Media: Ink and Watercolors 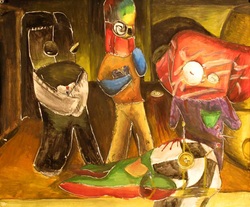 God bless the Nazis. Not for Hitler and the horrible atrocities his third reich. They can burn. What I'm getting at is the contribution to the world that isn't real. Virtually everywhere in the world of fiction Nazis can be found everywhere either for tragedy or comedy. Just look at The Devil With Hitler. Poor in taste but rediculous in the long run.
I've also been into Nazisploitation recently, like Salon Kitty and the Rob Zombie fake trailer Werewolf Women on the SS, so you can get where all this is coming from.
Genocide - Yellow was made to reflect the inhuman experiments the Nazis performed on people. When people think Genocide, they think Holocaust. When they think Holocaust, they think concentration camps and the symbol of poison in the atrociousness. Infection, madness and poison. See where I'm getting at?
​
Media: Ink and Watercolors 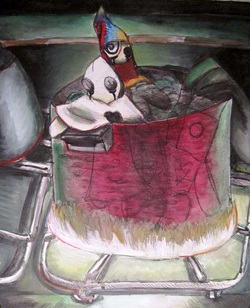 .From the scripture of Dante Aligerie's Divine Comedy epic, it says that those who are devout to the sin of Violence are sent to the 7th circle of Hell. The 7th circle is then divided into three rings; the boiling blood-river Phlegethon for violence against their neighbor, the silent forest for the suicidal, and the raining desert of Blasphomy, Ursery and Sodomy. As poetic as those last two may have sounded, the first one would be the first you would think of when you'd think of some crazy Jigsaw wannabe enacting gruesome murders.
​
Media: Ink and Watercolors 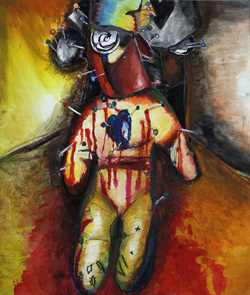 Why the Lights Are Flickering 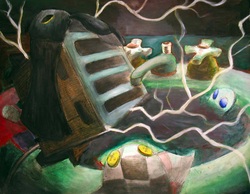 One of my funnier ideas, it took me a while to get down to making this. The idea just took me a while to properly gestate. 'Toaster + Sink = Ouch'. That's it.
I wanted to make the piece itself murky like a horror-movie bathroom would. You know The Ring or Dark Water? Where the quality has this murky look since the premise is surrounded by a supernatural menace to the protagonists that thrives in water? Well think that, but with less Japan and more Happy Tree Friends. In fact, most of these pieces are a lot like the Happy Tree Friends...
​
Media: Watercolors, Acrylic paint and Ink 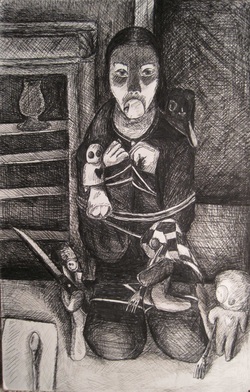 No relation to the movie Thankskilling. I originally made this around valentine's day, so one could say that this was made less as a Thanksgiving special and more of a Valentine's Day Special. I would just call this a holiday special, but then I'd probably get sued. Why? Exactly. The assignment that we were given was that we needed to make a piece that showed a fork, an apple and it had to be completely made from a black pen. Obviously, I found a way to enjoy myself. I through away the original pen, so your just going to have to take my word for it when I say that, yes, all that crosshatching going on was infact an entire pen's worth of ink. This is probably the closest piece that you would say resembles the work of my idol Tim Burton, as opposed to the other artwork that I made from my other idol Rob Zombie. Couldn't you tell? Your loss.
​
Media: Ink (black pen) 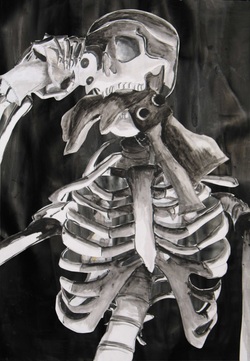 Merry Christmas everyone! You heard right. Black Tartarus and its sister piece White Elysium were made around the holiday season. Anyway, I've always been into the idea of folklore. That's probably why I like Neil Gaiman's The Sandman so much. I remember one day back when my mother and I were visiting a friend in San Francisco, and visited the Asian Art Museum of San Fransisco. Astro-Boy was everywhere. Then we went into the less contemporary side and found old sketches, detailing old folktales on Chinese and Japanese origins. In Japan, they call their faerie folk Yōkai. You thought the Japanese were weird enough as it is, just check these guys out. A giant face in the sky, racoon-dogs who's most potent weapon is their testicles and shape-shifting ability, a man with an eye in its anus. Oh yeah, you heard me. One such yōkai I based this piece off of the creature called the Gashadokuro. Picture if you will; a giant human skeleton, up to 50 feet tall, ready to grab you and eat you as it is composed of the souls of those who died of starvation. The idea for Black Tartarus clicked immediately. I even tried applying subtle ink-brush strokes similar to old Japanese art. Is that racist? Maybe.
​
Media: Ink 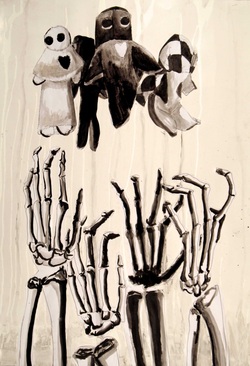 We've had Hell in all its forms, so why not add a little Paradise into the mix. The sister piece to Black Tartarus, White Elysium serves as the beacon of hope to all the little boys and girls and kittens and squirrels getting together to make more squirrels and your not buying any of this are you? This was actually an idea my teacher had when I presented the concept art to Black Tartarus to her. Thank you, happy holidays, and have a very merry eye-popping black christmas!!!
​
Media: Ink