Fortune's Big Score: The Romantic Lifestyles of the Psychic and Psychotic

Coming this Summer to a Gallery Show near you. From the creator of 'Grindhouse Crucifix' and 'Dolls, Dames and Electric Trains', comes something so horrible, so terrifying, you'll beg for more. You'll scream from the murder of hand-made rag-dolls, cringe from sado-masochistic skeletons, and shiver from burning gingerbread men, all told through the tarot cards that drove them to their knees. It'll entice you, and give you the creeps! 'Fortune's Big Score: The Romantic Lifestyles of the Psychic and Psychotic.' See the future, and let the terror begin. Rated X.
(Completed) 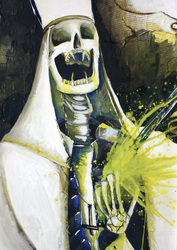 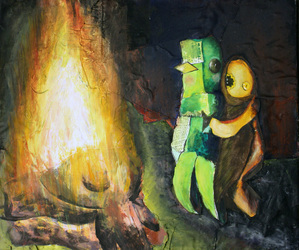 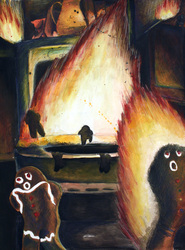 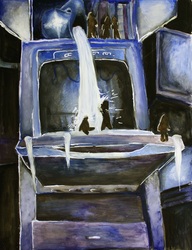 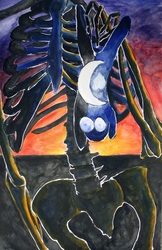 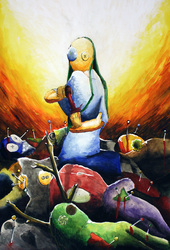 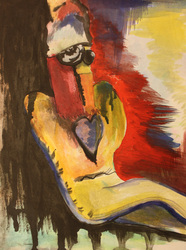 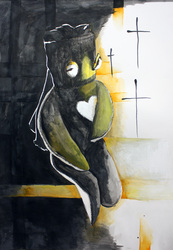 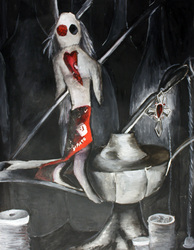 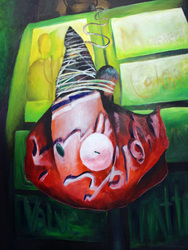 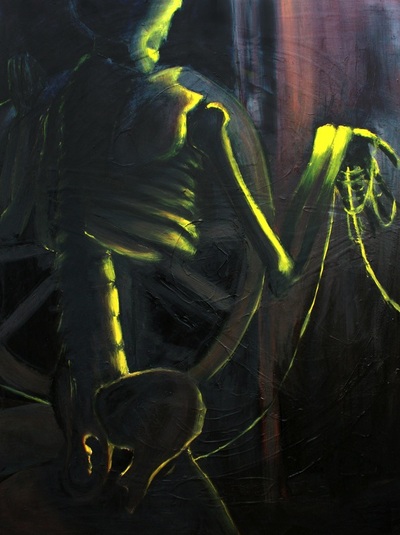 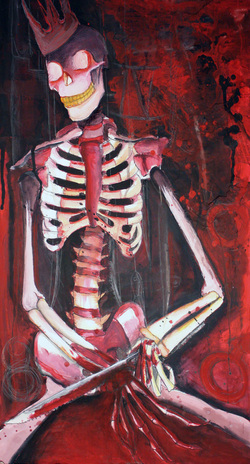 Welcome back ladies and gentlemen! I'm sure your excited what this year entails, do yah?!
...no? Well TOO BAD!
Following a Tarot card theme this year, I started with something simple. I was originally going to make a piece based after The Emperor, but other priorities asserted themselves. That and the steak-knife to the wrist was just too good. So then I decided to go with the King of Swords for it's abject violence potential. I'm trying to deviate myself from using my dolls because I don't want to revolve my career around them forever. Kick a dead horse enough and it'll go through said horse.
​
Media: Ink, Watercolors, Graphite Pencils, Colored Pencils and Collage 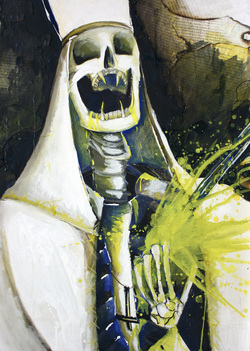 Vampire Satan-Pope staked in the Heart. I thought it was obvious, but others seem to think otherwise for the Hierophant. I tried putting a little symbolism here and there, like inverted crosses drawn in dried glue everywhere and hinting of God observing in that light patch on the upper-right side, but again; Vampire Satan-Pope staked in the Heart. Shut Up and enjoy the awesome!
​
Media: Ink, Watercolors, Graphite Pencils, Colored Pencils and Collage 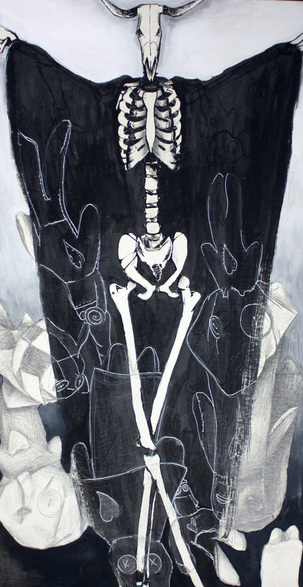 Yeah, yeah I know. I said that I would be going off the dolls, but I'm in a transition. Shut Up. I went with the Pope in the last one, so why not the opposite?
XV - The Devil was made to be foreboding and symbolic as opposed to just being foreboding. Is it working? It better be. I got the idea from flipping through pages of my favorite comic book The Sandman, and I love how Dream's cloak created a misty, partially smog-ish feeling and the rest is over with.
​
Media: Ink and Graphite Pencils 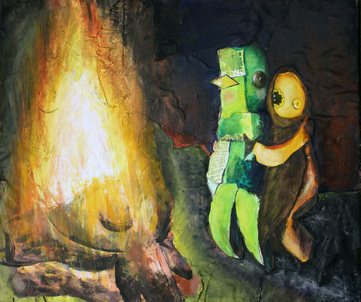 Never has a timeless tale between to fabric skinned people been so lovely. One is orange. One is Green. Their parents would never approve, but they fight for their love like it's the most important thing on earth. This is VI - The Lovers.
The dolls and the "fire-wood" (wink, wink) are cut from paper and painted in watercolors, with the background made from fabric heavily glued on and painted with layers and layers of ink and acrylic paint, with the fire itself being the core.
Again, "fireplace" (wink wink). 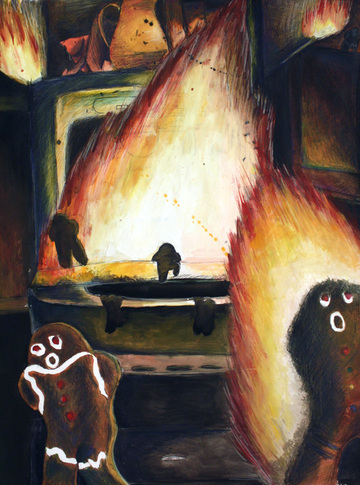 OH THE HUMANITY! Or "gingerbread-manity"...eh... whatever.
This is actually the first in a twin piece, depicting a raging inferno set on my oven as the Candyman Clan run for their very lives from the destruction rages over everything. I did what I could to provide a chaotic feeling to the piece as chaos is what The Tower is all about. Wait, "The Tower", "Destruction", "Twin Pieces"!!! OH MY GOD!
​
Media: Ink, Watercolors, Acrylic and Colored Pencils 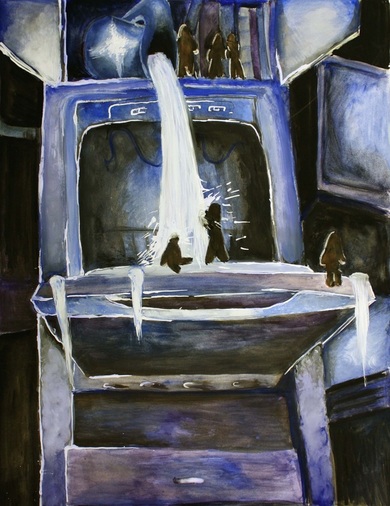 I'd say its a vast improvement over The Tower, wouldn't you? Where as The Tower is meant to represent the chaos and destruction one needs to survive (kind of like puberty I guess), The Star was made to be far calmer and cooler, meant to e the calmness after the storm that destroys The Tower. Where as The Tower has an all around theme of fire and the Hell it brings, The Star is the calming rain and the night sky after the clouds have cleared away.
Besides, what are cookies without milk?
​
Media: Ink and Watercolors 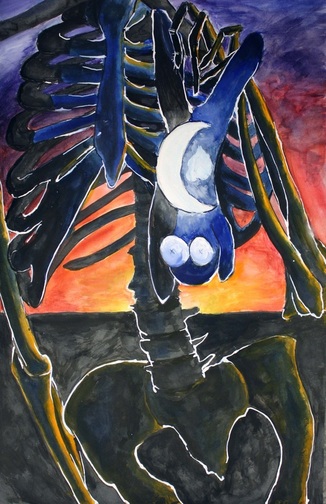 Lovely decor as the Arizona sunset peaks over the hills and baths the horizon in a dazzling fire. Or something like that.
When I was painting this, the words "Las Vegas" kept blaring at me like a fire alarm. Yen Sid has the crescent moon already sown on his chest, so it was too good to pass up!
​
Media: Ink, Acrylic and Watercolors 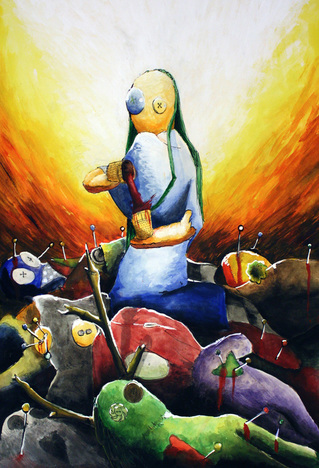 Everything but. See what I did there? :D
Anyway, Temperance was made as a sort of 'contest exclusive'. Goss Michael was holding a contest for everyone in DISD. We were all to submit a piece meant to symbolize "Conflict & Resolution". Not the most original theme, but it was perfect for Temperance, so why not?
​
Media: Ink, Acrylic and Watercolors 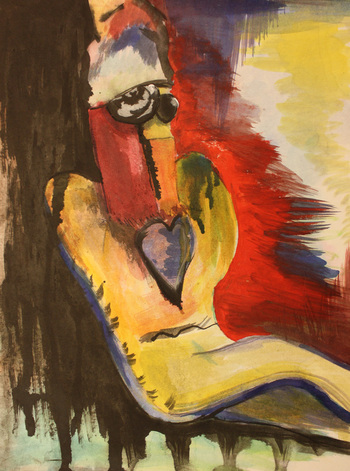 Though not the first in this little Ménage Massacre, but if anything I made this one as a sort of "Benchwarmer" for all of the other pieces. I got bored one day and decided to fool around with the watercolors on a small matt-board without drawing on it beforehand. Just a little 'whim on the winds' and 'throwaway gag'. really does hold the number 0, doesn't it?
​
Media: Watercolors 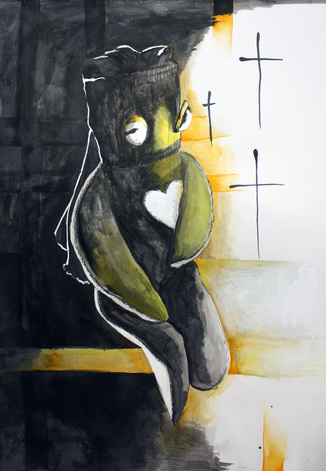 Running low on pieces to fill the 12 slots, I tried to come up witha  new one. Ebony (the doll) was always there for me. She was there when i made her, she was there in my ice-breaker Dolls, Dames and Electric Trains and she was there through all of the abuse I put her through. The pins, the sutures, the scissors and knooses. So it's safe to say that she's my patron saint, and what better a role then the Priestess?
​
Media: Watercolors 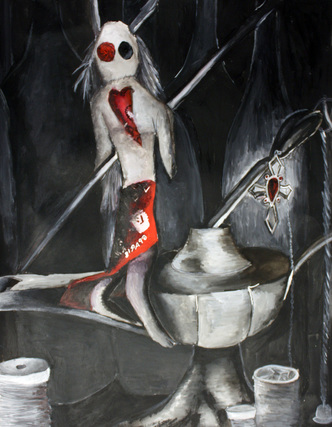 Not the greatest of testimonies, but it'll work for the time being.
The Emperor is big. The Emperor is fierce. The Emperor has a finger in every pie and an ice pick in every eye (more or less). No one gonna tell The Emperor what to do. NO ONE YAH HEAR?!!! 'Cept for his wife I guess.
I was actually planning on making The Empress using this doll's mate Goddess, but I never actually got around to it. Any requests for it given will be caught and shot on sight, so try it and you die.
​
Media: Ink and Acrylics 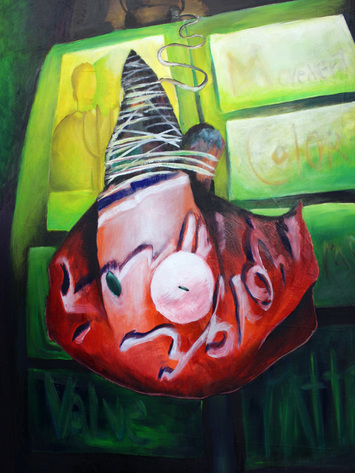 He's been hung by his toes. Temper has done it again. He's like Duckman. He walks about, he follows trouble as trouble follows him, speaks his mind with little to no taste about it, pinches women in their short-shorts and gets tossed off a roof with a pair of concrete nikes and his dog's liver stuffed in his mouth. Though mostly he just yells at people.
One of my favorites of the portfolio, the oil helps capture the contrast made in the colors and light source, while the wide angle lens gives it a warped Nick Carver fandango.
​
Media: Oil Paint 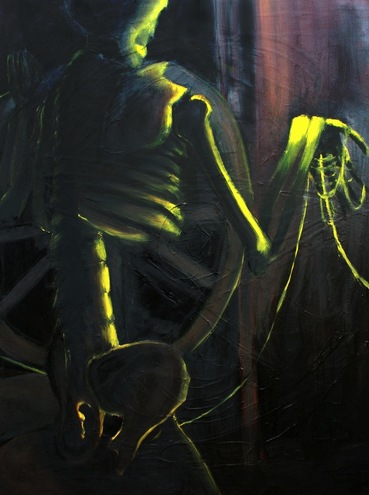 It's no secret that I'm a huge fan of the hit tv Show Once Upon A Time, and my favorite character would be the ever frightening, ever sly, ever powerful mad sorcerer Rumplestilskin, played by the ever charismatic Robert Carlyle. So I got bored one day and I had to start making a piece in painting class to get through the classes, and that's when the magic happened. Where I usually sell in my work intense contrast all over the piece, I went with a different approach and laid out some heavy darks everywhere with nothing but the gold he weaves from straw to provide any semblance of light. I was going to add the rag-dolls to keep it in continuity, but three of the other pieces in the original 12 piece line-up  would have helped make sense of it. That and the composition was enough as it is.
​
Media: Oil Paint